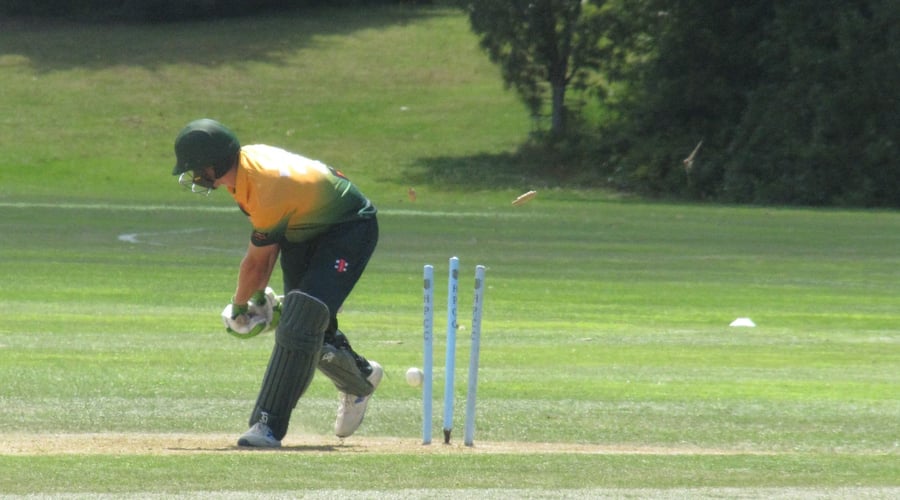 The Premiers batted first under blue sky and a large crowd surrounding the boundary and habituating the garden bar. They got off to a good start till losing Cole Briggs with 28 runs on the board after 3.5 overs. Ryan Schierhout was the next to go in the 6th over in an unfortunate run out, with his score on 28 and the team score on 41. Ryan’s innings included one 4 and two huge 6’s. He was followed on 53 by Tristan Van Ingen-Kal who was caught and bowled for 8. This brought the experienced Seb Langridge to the wicket to join Ryan Harrison. Ryan, very much now showing why he has an ACES contract, put on 53 for the 4th wicket and looked a class above. When Seb was bowled for 17 off 15 balls Campbell Knowles set about assisting Ryan and they added 29 with Campbell scoring 23 of them off 16 balls. Ryan was the last man out scoring 54 from 39 balls including four 4’s and one 6. That left Michael Ross and Isaac Bird not out on 5 and 3 respectively.
Consensus seemed to be that the Premiers may have been 15 to 20 runs short of what might be needed.
Howick Pakuranga set about their reply just as the clouds rolled in. They got off to a quick start with 30 off 3.3 overs when the first wicket fell with Caleb Gaylard snaring a caught behind. This brought veteran and former ACE, Donovan Grobbelaar, to the wicket and the complexion of the game changed. Grobbelaar and opener Bill Walsh put together a partnership of 63 in 7 overs. At the fall of Grobbelaar, 51 off 30 balls, Walsh was joined by skipper Andrew Morrison and it was more of the same as those two added 47 off the next 6 overs. When Walsh departed for 43 from 34 balls Howick were cruising needing just 15 from 21 balls and with 7 wickets available. Howick had a bit of a scare as they lost 2 wickets at 150 and the Mitre 10 Mega Albany Premiers' supporters dared to dream however it was not to be. Howick lost no further wickets with the winning total scored after 18.2 overs.
A disappointing result for the Premiers who must be, by now, sick of close losses. This does show they are not far off from where they need to be. Lessons will have been learnt and this team will be stronger having gone through this experience.
Howick Pakuranga put on a great atmosphere as did the lads who did the commentary on the match live streamed via Auckland Cricket’s Facebook page.
It was also great to see the number of Bays supporters who made the trek out to Lloyd Elsmore Park and to fly our major sponsor’s flags with pride.